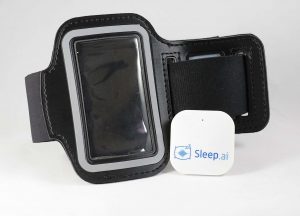 Michiel Allessie, a dentist who specializes in sleep disorders, began the Sleep.AI project in 2015. The company is based in Nijmegen in the Netherlands.

After practicing for 16 years, Dr. Allessie knew he needed to create a product which detects and records snoring and teeth-grinding (bruxism). He also wanted the product to serve as an anti-snoring device.

After working through 2015 developing the product, the team began appearing at Dental and Trade shows in the U.S. and Europe. One of the themes stressed was “prove to your patients they grind.”

The “Do I Grind” free app was the first product available, and it allowed patients to record and upload the sounds they make while sleeping. In 2016, the team appeared at shows in Chicago, Birmingham (England), Berlin, Barcelona, Miami, and Lisbon.

In 2016, the app began to receive significant notice at the Health Valley Event, where it won first prize in the Pitch event. In October, Sleep.Ai participated at the Digital Health Venture Forum in Valencia and was the award winner. In November, the Anti-Snore Wearable was announced. The announcement was followed closely by its designation as a European finalist at the European Venture Summit.

The Sleep.Ai Indiegogo campaign was launched in January 2017, to bring the Wearable to market. In two weeks, it reached 140% of its funding level, and it peaked at 164% in April. The product began shipping in April and is now available on the firm’s website for sale for around $127 (plus shipping), based on current exchange rates.

The app and the Anti-Snore Wearable are the only products sleep.ai sells.

The free “Do I Snore” app can be used independently of the Wearable. The app, available for both iOS and Android, should be used nightly, placed no more than 2 ½ feet from the bed. Your device should be plugged in throughout the night. It records possible snoring and grinding noises and will give you an estimate of the time spent in each state. The recordings can be made available to your doctor or dentist, so you can develop a plan.

The Wearable is a small round device which fits into a leather pouch attached to an elastic armband worn around the upper arm. The wearable will also vibrate if the app detects snoring, and in your sleep, you’ll be stimulated to roll onto your side to stop the snoring. The sensitivity for the vibration is adjustable. The company indicates it may take several days 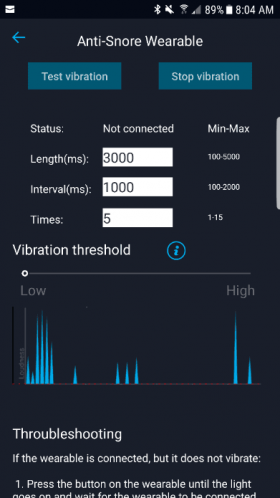 I tried the app first since it was both free and available. I used it as a stand-alone app and compared it with other snoring apps I have. It does not appear as sensitive as the SnoreLab app, but it did successfully track my snoring rates. The app appears to be very well-designed, and it captures snoring and plays back the sound very well.

The ability to connect the app to a wearable device proved to be an irresistible temptation. I was looking forward to finding a device which would work as well as an anti-snoring pillow for a lower price. If the vibrations were strong enough to make me roll over while sleeping, it would be a success.

As is so often the case, I was unable to use the Sleep.Ai wearable for several weeks. When I got around to it, the battery was dead, with no way to charge it. Customer service, however, responded very quickly with a video, which showed how to change the battery. It’s a very simple process, but probably should be noted up front.

Once charges, the Wearable quickly connected with the app. I set the sensitivity to “Low” and the number of buzzes to five.

I fell asleep quickly. The Wearable is not invasive, and it took no time to get used to wearing it.

Twenty minutes later it buzzed and woke me. I asked my wife if I’d been snoring, and she said she hadn’t heard anything. I tried to sleep again, and it buzzed after a few minutes, while I was awake.

I continued to have Bluetooth connectivity issues. It’s impossible to tell if the device works well if the connection is unreliable. I had no questions with the app—it was picking up my snoring well. It is almost as good as SnoreLab.

But I wanted to get reliable readings with the Wearable and find out if the vibrations would work to turn me over. Late night is not the time to have Bluetooth issues, let alone other sleep concerns. Turning the device on and off and resetting my phone didn’t work.

I finally contacted the company, and they sent out the newest version of the device, which has better connectivity. That problem seemed solved.

“Do I Snore or Grind My Teeth” App

The app is good. It’s not quite as sensitive in picking up snoring as SnoreLab, but it captures snoring very well-especially the louder snores. It has a lot of features.

The stats on the app are basic but accurate.

If you like snoring pillows or don’t want to wear a mouthpiece, buy this device and use the app. It is a great snoring aid.

Keep tweaking it nightly in the settings until the sensitivity and vibrations are set just right for you. You will find the point where it works.

If you’re not concerned about teeth grinding, disable the bruxism alerts, but take advantage of the anti-snoring features. 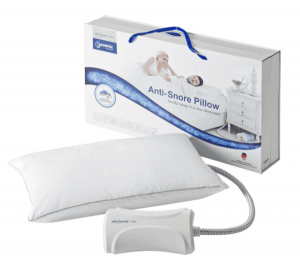 It was only a matter of time for another anti-snoring smart pillow to come on the market. When I discovered the Nitetronic goodnite™ Anti-Snore Pillow, I knew I had to try it out and see if it was effective. The Company Nitetronic is a German company that started in 2011. The company has been successful in Europe,… 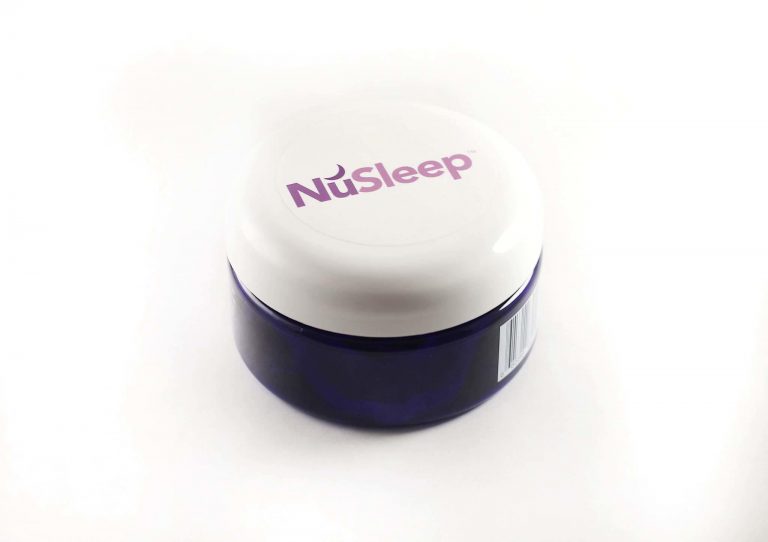 I’ve reviewed all kinds of anti-snoring devices, including pillows, nasal strips, tongue retaining devices, MADs (mandibular advancement devices), and mouthpieces. There is a new entry into the mouthpiece category. The nuSleep OTC is an over-the-counter oral appliance that mimics the process of having your dentist make a custom mouthpiece without the wait or the high… 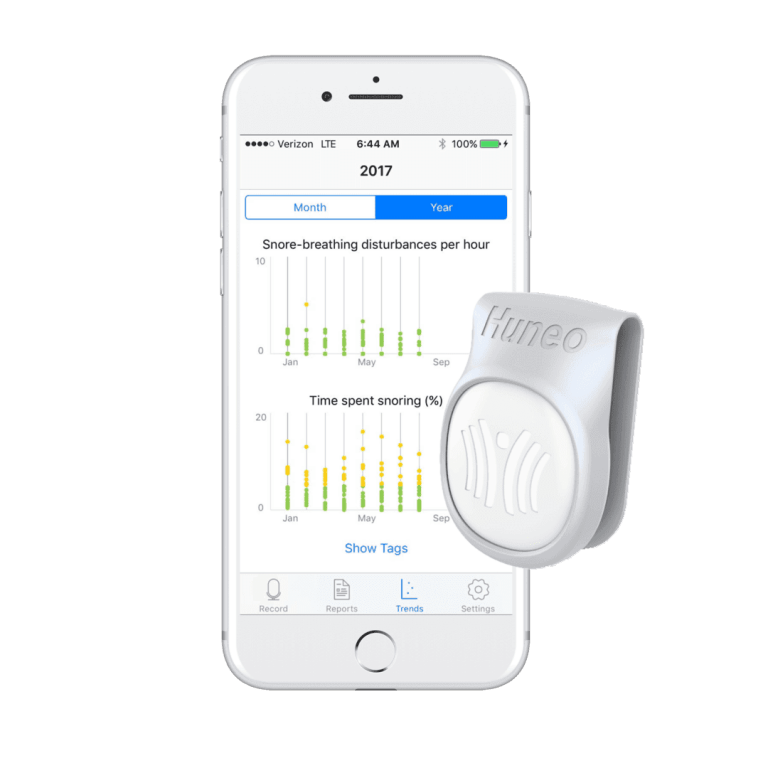 If you’re anything like me, you’ll do whatever it takes to reduce both the severity and the frequency of your snoring. When I came across the Optimum Sleep Workout, I was initially skeptical. Could exercise be the final cure for snoring? To find out, I put the product to the ultimate test and dived headfirst… 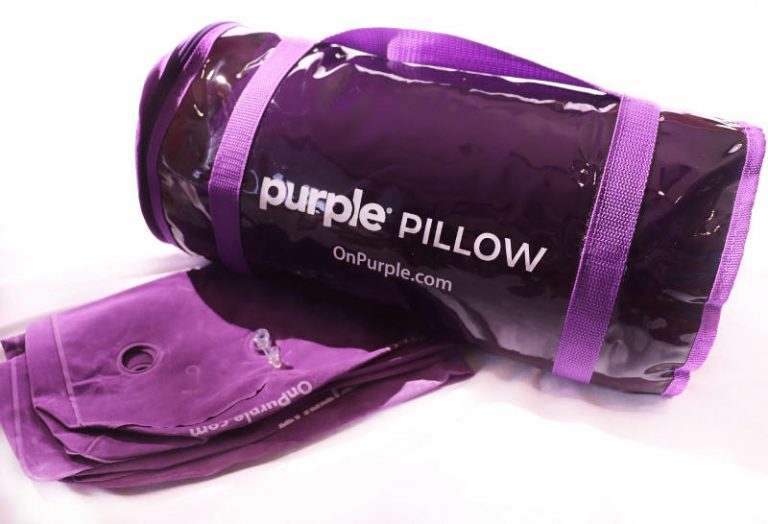 Pillows seem simple. You fill a cloth bag with soft material, put it on a bed, and get a good night’s sleep. It’s the easiest thing in the world, and it’s low-tech. Why not a high-tech pillow, especially if it works really well?  The Purple Pillow won’t connect you to the Internet, or play music…. 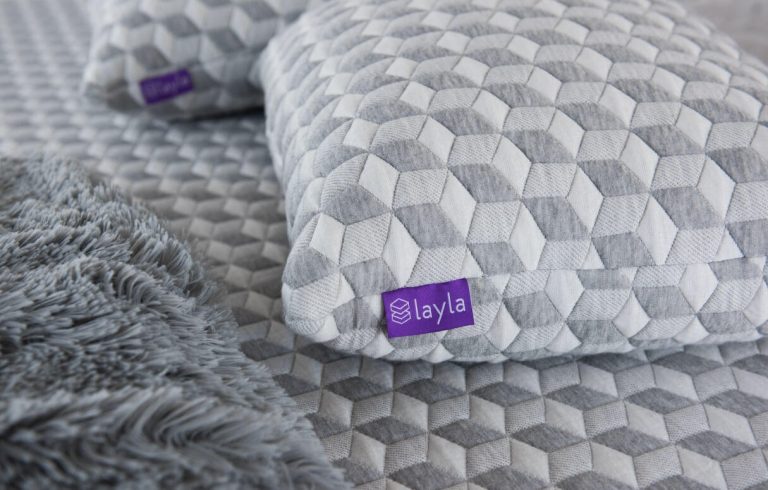 Layla Sleep is an American-made company which specializes in innovative mattresses, pillows, toppers, foundations, and bed frames. Layla Sleep is best known for the Layla Mattress, which has both a soft and a firm side, and the Layla pillow. Update:  $25 OFF Coupon Code for Layla Pillows:  SNORING The Layla boasts a range of all-natural… 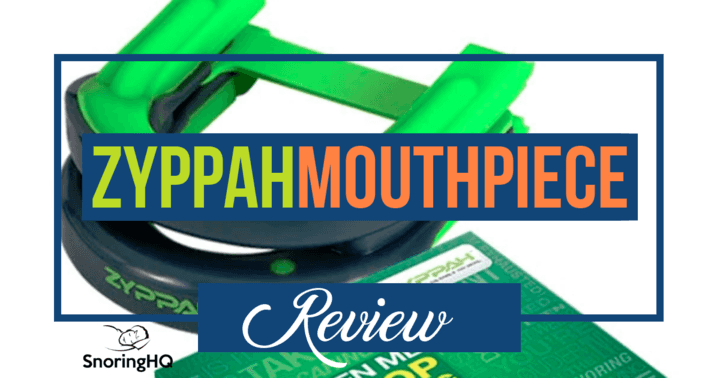 Snoring mouthpieces are not much to look at – so I at least give credit to Zyppah for trying.  The Zyppah product is classified as a mandibular advancement device (MAD) and its black and neon green (also available in other colors). Update: Some readers have left reviews about issues with me about Zyppah’s poor customer…